The Nikaean Cross is a fourth-century Coptic bronze cross which was presented to the Club by Sir Ronald Storrs KCMG, KBE (Chairman of the Club from 1948 until his death in 1955). The cross had been presented to Sir Ronald when he was Oriental Secretary to Lord Kitchener (British Agent and Consul-General in Egypt, 1909-14) by the Coptic Pope Cyril V.

After his service in Egypt, Sir Ronald was Military Governor of Jerusalem (1917-21) and then Governor of Jerusalem and Judaea (1921-6), Cyprus (1926-32), and Northern Rhodesia (1932-4). In 1935 he was one of six pallbearers at the funeral of T. E. Lawrence, who had described him in The Seven Pillars of Wisdom as the most brilliant Englishman in the Near East.

The Nikaean Cross is placed on a stand in front of the President at meetings of the Club. Replicas made by Peter Shorer in the 1980s are given to distinguished ecumenical guests. 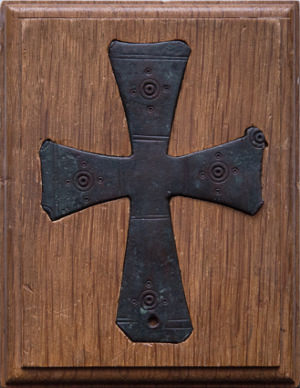