The Archbishop of Canterbury is the President of the Nikaean Club, which exists to support his ecumenical ministry.

The Club, with almost 400 members, is an association of Anglican clergy and laypeople who currently carry (or have carried) responsibilities in the ecumenical movement at local, national or international levels.

Anglicans in communion with the See of Canterbury who are interested in, and have practical experience of, the ecumenical movement are eligible for nomination as members of the Club. They must be proposed and seconded by existing members who can vouch, from personal experience, for their suitability. Nomination forms (including full details of the candidate?s ecumenical interests and experience) are considered by the Committee. The size of the venues in which the Club’s events are held imposes practical limitations on the number of members.

The Executive Committee may additionally invite members of foreign churches in communion with the See of Canterbury who are resident in London to become members of the Club.

The Club’s affairs are managed by an Executive Committee, consisting of the Chairman, Honorary Treasurer, Secretary and elected members, together with the Guestmaster.

On the table in front of the President at each dinner is the Nikaean Cross. 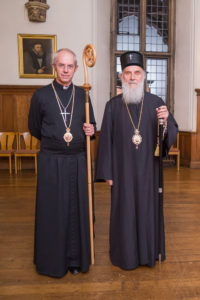 The Archbishop with the Patriarch of Serbia